Witchcraft and the Scots Review by Elaine Hindle

Witchcraft And The Scots   by   ARNOLD CROWTHER     (previously unpublished) 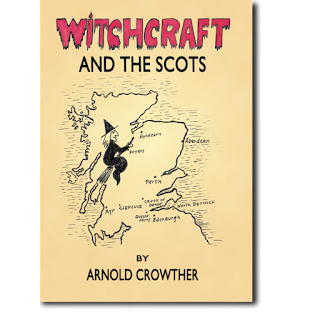 A Review by  Elaine Hindle
"I found this book a very enjoyable and informative read.

It digs into the witchcraft trials and the awful treatment meted out to those accused of witchcraft in Scotland, describing good accounts of their experiences and although harrowing at times need to be told.

It is interesting to hear their individual stories and although there is some inaccurate information due to when this book was written, I still think it has a lot of valuable information and is a good starting off point, for anyone interested in the Witch Trials in Scotland.

There are also tables that I had never seen before, about how much it cost to execute a witch.

One of the more interesting chapters I found, was on the origin of where the name of the “devil” came from and who this person actually was ,which I found quite enlightening.

I especially like the section giving the names of the various coven members and the areas in Scotland where they came from, as this is good information from a further investigation point of view.

The book is split into different sections and covers a wide range of topics, from Alistair Crowley’s Scottish connection as “The Laird of Boleskine”  To the tale of “ The Brahan Seer”

It also has a good chapter on Spells and Charms, which shows how Christianity had crept in to the wording and another Chapter on how Halloween was celebrated in Scotland.

I would  highly recommend this book, as it has a lot of useful information and although I did not agree about some of author’s findings regarding the origins of faeries.

I still think that the book is definitely worth a read."