Skip to main content
Posted by Julie Belham-Payne May 04, 2018

A great Tribute to Doreen Valiente on American Poets Day

If, as is proclaimed in the Charge of the Goddess, “all acts of love and pleasure are my rituals,” then the pleasure of poetry is among those rituals, too.
April is National Poetry Month in the United States. Here’s a look at the works of three female poets: a Wiccan priestess, a pioneer in the modern women’s/goddess spirituality movement, and a priestess in the Welsh Bardic Tradition.
The Charge of the Goddess: the Poetry of Doreen Valiente
Doreen Valiente Foundation in association with the Centre for Pagan Studies, expanded edition 2014, 142 p.
Ironically, the Charge of the Goddess included is this collection by the acclaimed “mother of modern witchcraft” is not her rhyming, poetic rendition but rather her far more famous prose version.
The late John Belham-Payne, a friend and “working magical partner” of Valiente’s, shepherded her poetry into publication following her death in 1999, thus fulfilling a deathbed request by the Wiccan priestess who had been initiated into Gerald Gardner’s coven by the man himself in 1953.
Belham-Payne made the right choice. Valiente’s prose version of the charge flows, slithers, breathes, and pulses with organic rhythms in ways that are constricted out of the rhyming version. The poetry version (available in Valiente’s book The Rebirth of Witchcraft but sadly not included in this volume) reads like a poem, albeit a beautiful one. The undulating cadences of the prose version sound as if the goddess is whispering in one’s ear. 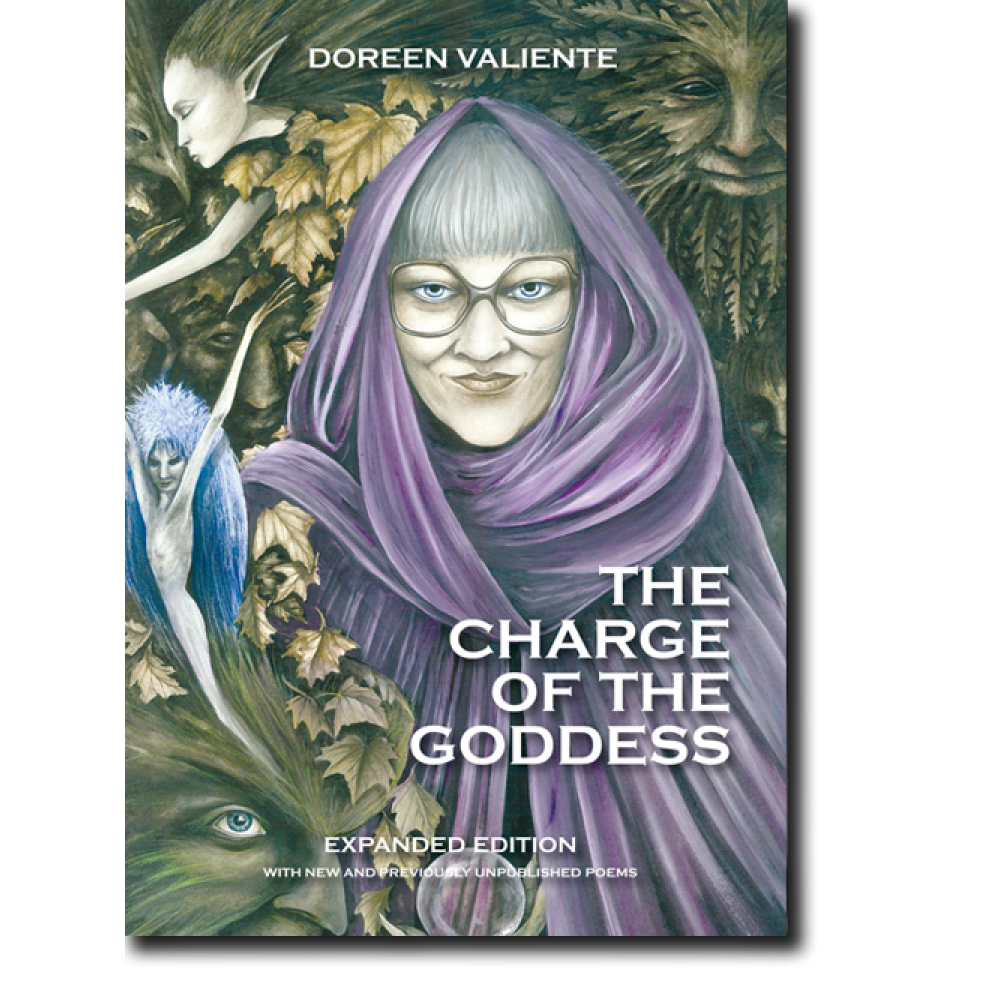 Fueled by the span of Valiente’s life in this world (1922-1999), one of the charms of her poetry collection is its mix of archaic and modern styles. In these days of hipster wannabe free verse, a sonnet or rhyming quatrains of A-B-B-A or A-A-B-B may seem quaint, but such formats properly evoke Valiente’s legacy as one of the key founders of modern witchcraft.
“The Tarot Trumps,” “To Aleister Crowley,” “Poem on the Death of a Witch,” “To the Necronomicon,” “Deus Cornutus” (a 1984 work which ponders “How many names has the Horned One?”), “Homage to Pan” (perhaps a homage to Crowley’s “Hymn to Pan”), and other poems all vibrate with an archaic beauty.
However, one of Valiente’s most soul-stirring poems, “Elegy for a Dead Witch,” weaves its spell without use of rhyme:
To think that you are gone,
Over the crest of the hills
As the moon passed from her fullness,
Riding the sky,
And the White Mare
Took you with her.
To think that we will wait
Another life
To drink wine from the horns,
And leap the fire.
Farewell from this world,
But not from the circle
Valiente reveals her playful side in “Computer Blues” (written in 1975!) and even a bawdy limerick, titled “An Unsolved Problem of Psychic Research,” about “a young lady named Freeman who had an affair with a demon.”
“Pop Song,” written in 1975, indeed swings with the rhythms of a pop song’s lyrics, despite its lament of a world gone awry:
. . . Up in the Andes where the air is thin
Where Che Guevara’s ashes are blowing in the wind
I heard that condor’s ghost say "Listen son
When you get that power from the mouth of a gun
You can’t put it back
Oh oh
Sorry ’bout that . . . .
What would a poetry collection by the “mother of modern witchcraft” be without a piece that is more spell than poem? That’s fulfilled by the “Witch’s Chant,” the last work in this volume:
Darksome night and shining moon,
Hell’s dark mistress heaven’s queen
Harken to the Witches’ rune,
Diana, Lilith, Melusine!
In the earth and air and sea,
By the light of moon or sun,
As I pray, so mote it be.
Chant the spell, and be it done!
Queen of witchdom and of night,
Work my will by magic rite.