Midsummers greetings to all, this season's newsletter has taken a different format, with contributions from many artists, writers, storytellers and poets. We hope you enjoy the content herein.
While we prepare our own rituals and celebrations for the longest day and the warming of the sun towards the harvest, we think of our various projects and relationships strengthening and coming to fruition. We are delighted to share our news with you.
The Doreen Valiente Foundation Trustees have been hard at work and finally we have sifted through all the documentation necessary to become recognised as a Registered Charity - we proudly announce this and our number is 1178528 and the Charity Commission can be found here:
https://www.gov.uk/government/organisations/charity-commission .
Since the excellent exhibition we did in 2016 in collaboration with Royal Pavilion and Museums Brighton we have continued to work with them, and have had access to their curatorial experts, who have been looking over our paper archive and helping us to maintain it in a good condition.
Our work continues with them and we are still hoping to collaborate with accredited venues including Brighton on further exhibitions. 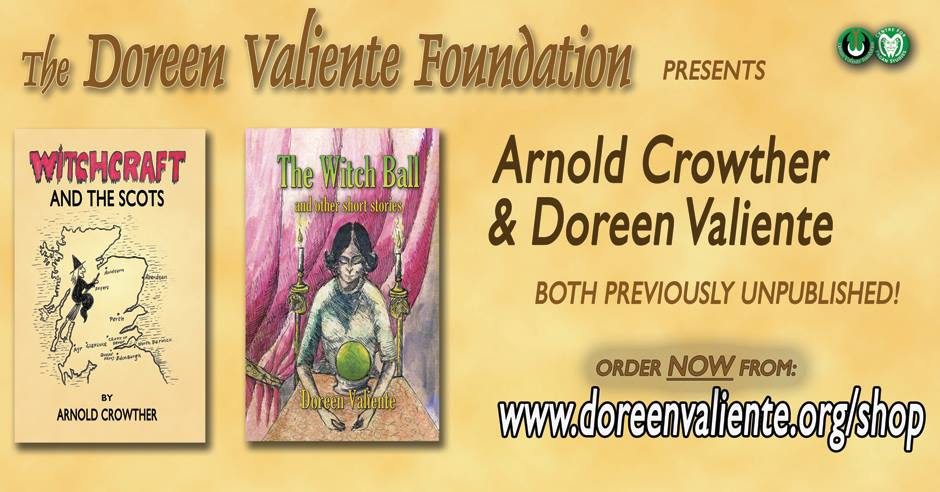 A must-have for your book shelves. A previously unpublished book by Arnold Crowther with original drawings by the author, Witchcraft and the Scots “Using extensive research into witchcraft court cases and folkloric tales, Arnold Crowther takes us on a thought-provoking journey through centuries of Scottish witchcraft and witch belief. From Mary Queen of Scots, who brought witchcraft to the fore in Scotland, right up to Aleister Crowley, notorious magician of the twentieth century, Crowther guides us through the most notable cases of Scottish witchcraft and magic.”

We are delighted to announce the talk “Narrative Magic And Magical Thinking” by Richard Levy (CFPS speaker). The talk, hosted by the Children Of Artemis West Sussex, on August 14 at Sompting Village Hall, West Sussex, promises to be very interesting and inspiring, tickets are free but you have to book. Here’s the link for tickets:- https://www.ticketsource.co.uk/coa-mid-sussex-pagans

We now have a good selection of speakers who are available to speak on behalf of the CFPS and the DVF at your function/event. We can provide a mini exhibition of some of Doreen Valiente’s most tiny treasures, to go with it. Please let us know if you are thinking of hosting an event (in the UK for now) and would like our speakers to attend.

As you know we have many wonderful people who have been so kind in providing interviews telling their own stories about their spiritual paths. If you would like to do an interview with us to tell YOUR story, please contact us by email enquiries@centre-for-pagan-studies.com and we will devise a questionnaire tailored just for you. You can see some of the interviews we have published so far here http://centre-for-pagan-studies.com/centre_for_pagan_studies-paganism-Blog-17.php#sthash.Db920GeA.dpbs

Lastly we would not be able to do all of this without YOU! Thank you for subscribing and stay in touch via our membership scheme - http://www.doreenvaliente.org/Doreen-Valiente-Membership-4.php#sthash.FeZYamxi.dpbs
Best witches!
Julie Belham-Payne 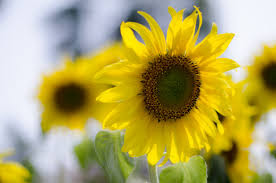 “The sun has reached its Zenith
And Casts a Golden Glow over the fields of ripening corn
Languid days without a breath of air as the heat rises
The sweat trickling down my collar
Too hot for toil
Even the birds are silent sheltering under the cool branches
The day wears on and the sun in the heavens is relentless
We pray for the cool of evening the lengthening shadows
Of purple hues as the fiery orange ball sinks slowly in the west
Down in a last glorious hurrah of a sunset painting the sky like a furnace
Flickering flames of orange and red dying down into purple deepening embers
A farewell to the day as the coolness of the night beckons on and the first pale star is seen beyond the horizon
The Solstice has gone the bright days of majesty imperceptibly will wane
slowly the days will shorten and the blaze of glory will be a pale reflection of its former power. “
Elaine is a regular poet for our group, Pagan Poets and Writers and has written an article about Epona, See here http://centreforpaganstudies.blogspot.com/2018/02/goddess-epona.html

Details of this artist can be found here https://hekainart.wixsite.com/filipasilva/runa

“I traveled to a dark forest and the Seal of Runa appeared in front of me. I uttered "I wish to activate Runa in my life."
The Three Following Pictures can be seen as a Tryptych if laid side by side. 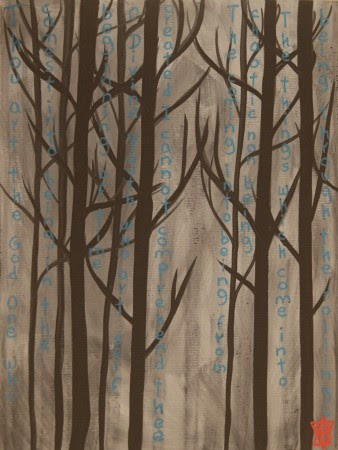 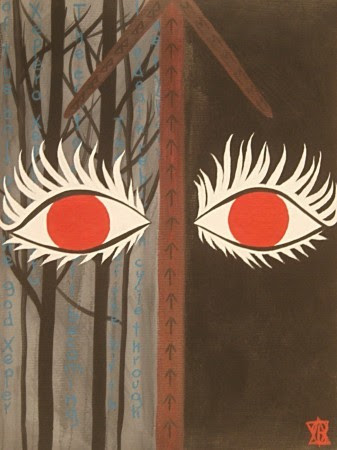 Poem from Portugal - Tribute to Witches Memorial
by Isabel Andrade

Isobel is a Doreen Valiente Foundation Trustee and Director of Pagan Federation International (Pagan Association Portugal) http://pt.paganfederation.org/o-que-e-pfi/pfi-portugal/
MEMORIAL
TRIBUTE
TO THE SOULS OF THE SILENCED SCREAMS
ACCUSED BY INQUISITION
ACCUSED
OF NATURE LOVING!
OF FOUNTAIN AND CLIFF WORSHIPING!
OF STORMS NEVER FEARING!
ACCUSED OF BEING A SIN
TO SING TO THE WIND,
TO GROW CROPS WITH SPELLS
TO DISPEL MISERY WITH SONGS
TO LIVE OF WINE AND REVELRY...
TO THOSE WHO PASSED AWAY
WITHOUT KNOWING HOW COULD LIVING BE A SIN
AND NO MORE COULD READ THE FORTUNE
WHO NO MORE COULD CRY OUT TO THE WIND
WHO NO MORE COULD KEEP DISMAY AWAY
NO MORE DID THE SUN AND THE MOON WORSHIP!
I MAKE THIS TRIBUTE
TO OUR ANCESTORS
WHO PASSED AWAY IN THE GALLOW OR THE FIRE
IN THE NAME OF THE ONE GOD
NAMELESS AND FACELESS.
THE FOUNTAINS WENT SILENT
EXTINGUISHED WERE THE CANDLES ON THE ROADS
THE MOON GODDESS THEY OVERSHADOWED.
AND THE SUN GOD THEY WANTED TO CONCEAL
THEY BURNED THE SACRED FORESTS...
FROM THE THOUSAND NAMELESS VOICES
JUST A FEW STILL REMAIN.
THEIR FAITH THEY DID NOT ABANDON,
AND IN THE TURN OF THE NEW MILLENNIUM
THEY RISE UP AGAIN...
Isobel Andrade 2000  (HPs Lilith) Portugal

I wrote this spell some time ago inspired by Doreen Valiente’s candle spell. I doubt I’m the first. The point of this spell is to work work with incense in relation to its power over air, travel, speed and words (incantation / utterance). Your spell and messages can travel on the smoke
There is a lot of scope with this you can use your own or various blends of incense or use the one
E.g. frankincense (for cleansing); sandalwood (wish granting) etc
The scope of this is that you are working with herbal powers which you can mix and blends as well as working with flame and air/smoke:
Light your incense and recite:
Herbs that burn mix and combine
Both earthly powers and divine
Aid my spell and incantation
Aid this act of my creation
Fire, smoke and air be free
And conjure power now to me
Spirits of flame and smoke be blessed
Aid my spell and my behest
And thus my wishes come to bear
From root and herb and word and air
*Blend example*
One blend I like to work with: -
Lemongrass: clearing the way
Crow feather/feather: air ; carry spell / messages
Dragons blood: fire, potency
Willow bark: water and moon magic
Rosemary: witch herb
Honeysuckle: earth
Bay leaf / sandalwood: wish granting
Obviously use your own and work with what you e got but there is of course a lot of scope.

Reyn til Runa by Filipa Silva 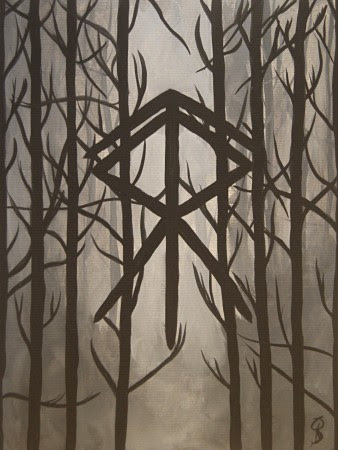 Come dance around the faery ring
Where all is bright and gay
The music takes you on the wing
As sylvan elves do play
For they are here but for a night
Of rapturous reverie
What wondrous magic they do weave
That ere an eye could see
The myriad colours they do spin
Of gossamer cobweb fair
As light and pure as thistledown
Float on the evening air
The senses reel from nectar sweet
Collected from flower to flower
As the Faery Queen so regal Sits
within her rosy bower
And on the merriment doth flow
On this Midsummer Eve
So caught up in their magic
You'll never wish to leave
But the sun it is arising
Upon a brand new day
The faery revels over
They can no longer stay
You catch the last faint echo
Of laughter as they leave
And you are left wondering
Was that only make believe? 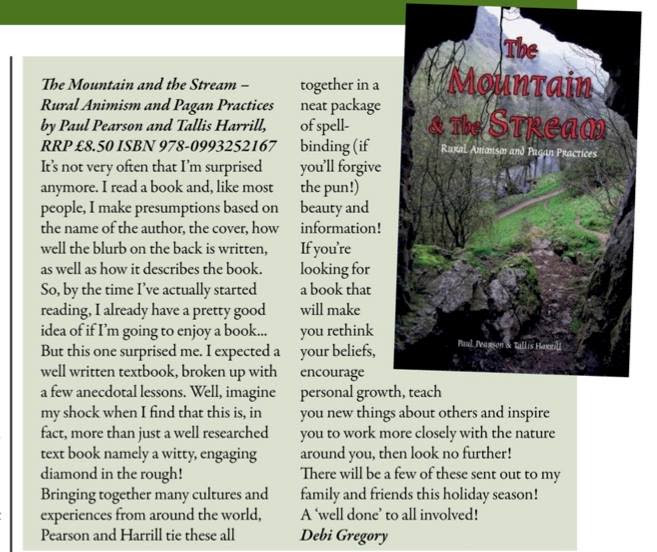 This can be ordered direct from the Authors’ website - http://www.greenmantle.org.uk/book.html

We hope you have enjoyed the newsletter, if you are on Facebook stay in touch with us by joining our group.
https://www.facebook.com/groups/centreforpaganstudies/
Labels: Centre For Pagan Studies Doreen Valiente Foundation. Midsummer Newsletter