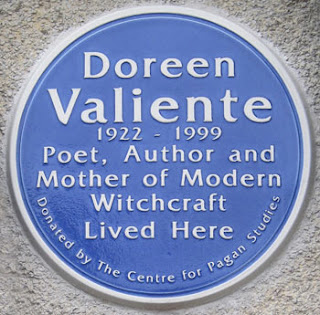 On Midsummer's Day 2013 Doreen Valiente made posthumous history by becoming the first Witch to be awarded a blue plaque for her life and achievements. Tyson Place, a council block in Brighton, made history too as the first building of its kind to have a blue plaque on its walls.

The day began with an open Midsummer ritual on Brighton's Steine Gardens a few yards from the seafront where several hundred gathered to the thunderous sound of The Pentacle drummers. Respected Sussex witch Ralph Harvey and The Order Of Artemis led a moving and dignified ritual utilising many of Doreen's words. As the busy Brighton traffic and public stopped to observe, many commented that, had it not been for the likes of Doreen and her work, such an event would have drawn very different attention to the respect the onlookers gave it, some even joining in!

At Tyson Place an atmosphere of expectation grew as the Pentacle Drummers and Hunter's Moon Morris took turns to entertain the growing crowds. Councillor Denise Cobb, the Mayor Of Brighton, arrived to applause and Ashley Mortimer of the Doreen Valiente Foundation began the formal proceedings with a quip that while Doreen "might not be the most influential witch in the world, she was definitely in the top one"! After speeches from the Mayor, Ann Ewings of Tyson Place Residents Association, a reading of Doreen's poem "The Sussex Witch" and Rufus Harrington raising a cheer with his proclamation of "Up the Old Goat!" John Belham-Payne, Doreen's last High Priest, gave an emotive insight into her personality and the moment finally arrived. Julie Belham-Payne and the Mayor pulled the cord, the blue curtains parted and the magnificent plaque was finally revealed to a barrage of camera flashes and exuberant cheering which drowned out even the Pentacle Drummers. History was made!

The Doreen Valiente Foundation have been overwhelmed by the donations we received for the plaque and the support we raised from Brighton Council, the Sussex Heritage Commission and the Blue Plaque Committee and this has provided us with the basis for further plaques for other important Pagans. We have now secured the support of the owners of Gerald Gardner's old house near Christchurch and we are putting the remainder of Doreen's blue plaque fund towards a campaign to have Gerald recognised in the same way, hopefully we'll move on to others too . . . 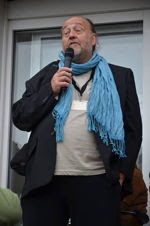 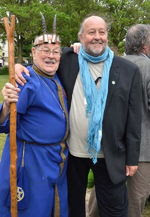 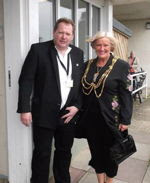